Be consistent but evolve - Absolut Vodka 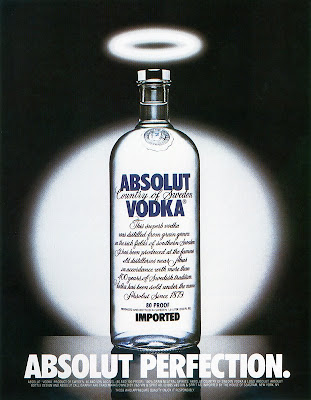 Consistency is generally something brands try and maintain in their advertising.

The reason is clear. A consistent look or feel across your advertising will help consumers know it is you quicker. Each ad builds on previous ones and helps build awareness quicker. At less cost. All good. But the danger is everything becomes the same. And you lose cut-through. Yes, they know it is your ad but are bored with it.

Absolut Vodka is an interesting case study of a brand that has been highly consistent - while managing to inject relevance into their advertising.

Absolut break many of the rules most brands work within. For example, unlike most global brands in the 80's and 90's, they never used TV to build their brand. Most brands might use an advertising idea for several years, then move onto another. Absolut have used the same campaign since their very first ad in 1981. And unlike many premium brands, all their advertising is based on product shots - on the bottle.

They are consistent. Very. But they are brave and intelligent enough to break their own brand guidelines rules, while still staying true to the campaign. For example, in the beginning they agreed they would always have two words in their headline. Nice idea but they dropped this, as it was limiting. You'll see many ads with just one word. Another example - in the beginning, their brand colours were black, blue and white. Again, they dropped this later, introducing some vibrant colours like red, blue and yellow.

Seems like small stuff but if you've worked with any large brand, you'll know how serious they are about their brand guidelines. And rightly so. Brands need guidelines to be consistent, to get the awareness and craft the right position and image. But having the courage to break the rules is important.

I'll come back to Absolut in future posts pointing to more examples showing their leadership approach to brand management. There is a good book available with all their ads if you're interested.
Posted by Paul Dervan at 10:07 AM

Aah. I'm tempted to write dozens of words, but simple genius will suffice. I hope they make as much hay on the digital frontier as they have done in gossy mag land.