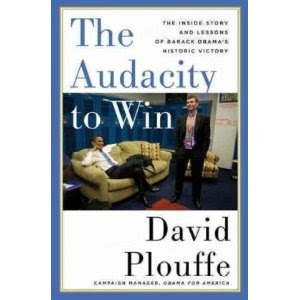 Audacity to win is written by David Plouffe - Obama's presidential campaign manager. If you work in any communication or campaign role, you'll should enjoy this.

Clearly their timing was right, having a candidate like Obama at a time when the country was hungry for change. So they had a better product. And we all know they did innovative stuff using the internet.

But Mr Plouffe's book was wonderfully insightful on other stuff too. For example, they were crystal clear on their strategy and stuck to it even when things got tough. This meant they didn't waste time stalling on decisions. A lot of the book was about decisions. If a decision to do something supported the strategy, they did it. If not, they let it go. How nice is that? And rare. Many teams don't even know that they are making decisions.

They were also so sharp on execution. What good is strategy if execution is poor? They worked hard for their win.

I'll come back to this again with specific examples. But if you have time, read it.
Posted by Paul Dervan at 11:57 AM

Thanks for one marvelous posting! I enjoyed reading it; you are a great author. I will make sure to bookmark your blog and may come back someday. I want to encourage that you continue your great posts, have a nice weekend!

Nice information provided by you, it really helped me to understand this topic. I have also referred this article to my friends and they also enjoyed this informative post. Audacity Crack