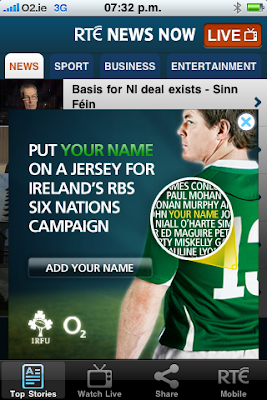 I generally stay clear from writing about O2 here (nobody likes when folk that talk about themselves all the time). But I really like this little piece of digital advertising and felt it was worth sharing.

We have an ad on the recently-launched RTE News iPhone app.

The ad is part of our 'Be the difference' rugby campaign. The campaign is a lovely little idea with a nice fit for the O2 brand. Based on the insight that supporters can actually influence the action and result on the pitch - O2 are making it possible for rugby supporters to get their signatures literally on the back of the players' jerseys.

Well done to Kevin Dunne and our digital agency Brando for their integration of this for the iPhone - so we can sign up directly from our iPhones. As you'd expect I know - but still nice to see it working smoothly.

As there are only so many jerseys, I'm assuming it is a first-come-first-served set up. So if you'd like to show your support - pop over to the bethedifference site sooner rather than later. There is another nice feature there too - you can upload a team talk. The best ones are played to the team. (I'm thinking Any Given Sunday as featured on Piaras' blog this week.)

The RTE app itself is pretty good. I dip into it most days for a moment or two. It's free too.
Posted by Paul Dervan at 10:22 PM

I'm liking a couple of O2 ads at the moment. That rugby one and the treats with the rugby supporters give me shivers. Which is nice....xx

hi Lisa, I'll pass on to the team and ad agency. That will make them happy:)