Today I completed my five-year plan 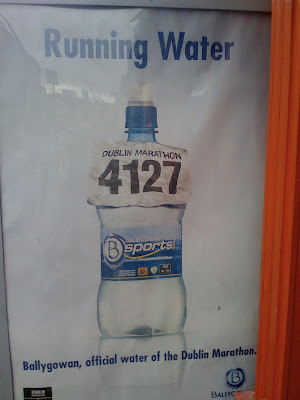 Today I completed my five-year plan.

Marathon plan that is. For reasons that make little sense, I decided back in 2004 that I'd do one marathon a year for five years.

Ballygowan, a sponsor, have been advertising along the marathon route for the past two weeks. I like this ad although the headline bothers me. It adds nothing to the ad (in my mind anyway).

Clearly the word 'running' links to the marathon, but this was obvious from the image. Is there another meaning I'm missing? Thought perhaps they were playing / punning on the words 'running water' but couldn't work that out either.

I think I'd have dropped the headline altogether. And maybe just increased the size of the official sponsor line below.

Perhaps they wanted to add a bit of charm. If so, I'd have gone with their 'Bodies Never Lie' line.
Posted by Paul Dervan at 5:59 PM