"It's not easy being Green" 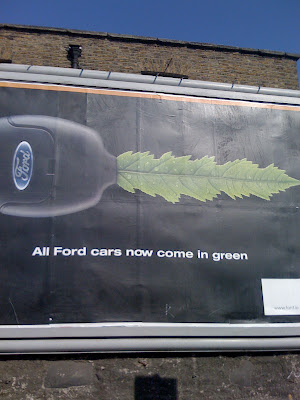 Watching TV the other night I saw three 'green' ads in a single ad break. Are they right to advertise their green ambitions, aspirations and plans? Or are they guilty of 'greenwashing' - talking up their credentials so we like them more and buy from them?

First up was a nicely shot ad for ESB explaining they are investing €22 bn into renewable energy. Next, Lyons Tea tell us they are on a 'journey to sustainability', followed by ad by Topaz keen for us to know that their fuels make our car engines more efficient.

I've seen a few other green ads floating about too - a second ESB ad for making Croke Park carbon neutral, one for EDF Energy and this (nicely executed) outdoor one for Ford.

As marketers, we try to simplify messages. That is what we are trained to do. So under the normal rules, the Ford ad above is a great example of cutting away the clutter and communicating a simple message. I'm guessing something like "Our cars are good for the environment" is the consumer message.

But the difficulty is that 'green' is not simple. Far from it.

If there is one thing I've learned from my limited exposure to green + marketing is that this is a complex minefield. Simple "we're green" messages can backfire quickly. Unilever, (who own Lyons Tea), found themselves under attack from Greenpeace about their Dove soap.

My question is not whether they should be green or not. Rather, should they be advertising their green activity? And I'm not necessarily saying they should not. But as marketers, we need to ask ourselves, why are we communicating this? Why are we spending money on a tv ad to talk about our green activity?

It might be 'we're doing our bit for the environment' and or a company feels strongly about green issues and believes its shareholders and customers do also. Or they have a new green product. Or they want customers to change their consumption behaviour.

Whatever the reason, the company needs to be clear about why it is communicating. It can't be as simple as "we want to be seen as green so let's find a way to position something we do as green". And you definitely need to be green before you can say it. The concern is ending up with something like this.

John Grant has a very comprehensive book - The Green Marketing Manifesto - on how various brands are implementing their green communication strategies. If it's ok with John I'll expand on the strategies in another post. And I'll show if the brands mentioned above are using any of these (they seem to be). It is well worth a read for any brand thinking of doing a bit of 'green' advertising.

As Kermit the frog said (and later copied by EDF Energy) "It's not easy being green".
Posted by Paul Dervan at 8:08 AM

Hi there,
Maybe a little off-topic, but purely on the "green activity" meter, Ford are better than many. Look at their redevelopment of their River Rouge Plant and their "Model U" concept car with eco-designers McDonough and Braungart. Article here

hi Tony, not off-topic at all. I don't know myself how green Ford are. Maybe they are comfortable that they are green enough to talk about it. The bit I wonder about is why they are advertising their greeness.

Paul, that's a really interesting post. Everyone seems to be green at the moment don't they and I think you are right if people are going to talk about it they better make sure they really are and also I think it really needs to mean something to their customers. I think from a non profit point of view often times companies want to be linked to an organisation to make themselves look even more green and that needs to be handled with care.

Do you think we may see a shift in focus from green to better value now (sometimes green implies more expensive) or do you think companies will try combine the 2?

hi Conor, i think that brands not actually committed to sustainability might chuck out green, and get back to lower prices. Then again, they are not necessarily opposite sides of a coin. For example, tap water is both cheaper and better for environment than bottled water.

did you see this illustration?